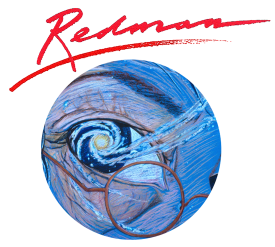 Helen Redman, MFA, is a widely exhibited figurative painter, teacher, feminist commentator and grandmother who shares her art in the context of life issues. She has taught at the University of Colorado and the University of Iowa, and has lectured and exhibited her art across the United States.  She has been an active force for gaining support and recognition for women in the Arts, co-founding Front Range Women in the Visual Arts in Boulder, Colorado in the 1970s, and serving as the first president of the San Diego Women’s Caucus for the Arts in the 1990s.  Redman is part of the first online digital archive dedicated solely to feminist art at the Brooklyn Museum

For over six decades, her work has centered on life passages — including pregnancy, mothering, illness, healing, and the death of a child, and on various stages of her children’s growth. Redman, who was born in 1940, has focused in recent years on exploring women’s journey through menopause and old age and contradicting the negativity provoked by aging in a sexist and youth oriented culture.

In the tradition of artist as shaman, healer and educator, Redman uses her art and teaching abilities to encourage women to claim their age as a time of heightened creativity and spiritual growth. Her work serves as a catalyst for others to explore the issues she raises, and for women to communicate their knowledge with one another.

Redman was previously known as Helen Barchilon (married to Jacques Barchilon from 1960-1973). She reclaimed her maiden name, Redman, in 1976 (after losing her wallet). She has been married to author and  musicologist Kenny Weissberg since 1977.

Her son Paul Barchilon  is a ceramic artist in Boulder, CO who creates beautiful platters, vases, tiles and Seder plates. He works both with traditional Islamic patterns and with his own complex geometric abstractions.

Her daughter Nicole Barchilon Frank  offers practical and spiritual advice on Food, Bereavement, Poetry, Parenting, Relationships, and Weighty Matters as she takes you into “The Nicole Zone.”